On Monday 7.6., three of the fife young summer employees started working at Probot Oy. Their task is to make TikTok videos. They brainstorm, film, and edit the videos themselves, but also receive help and support from Probot Oy staff, for example, for filming trips and for asking for permission to film. The first filming trip on Wednesday (9.6.) attracted a lot of attention and passers-by gathered to marvel at the robot dog.

According to the summer employees, Juuso and Annika Tikanmäki and Joona Tomperi, filming TikTok videos as a summer job has been fun and quite ok. Ella Anttila and Elli Heikkinen, who joined the filming crew a week later, feel that the coolest thing has been learning to use a robot dog and its activities. The best thing has been to get to work with a good friend. 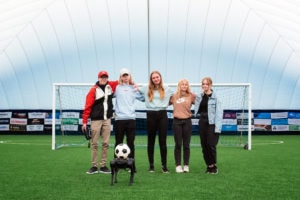 As producers of next-generation robotics, we need to be very up to date on the next generation of workers as well! We wanted to hire these young TikTok experts to make the type of videos that speek to them, says Matti Tikanmäki, CEO of Probot Oy. 11 robot dog videos have now been published, and some of them have a glimpse of Oulu’s sights such as Toripoliisi and Nallikari beach. The most popular video has already collected well over 405,000 views since its release (11.6.).

The first video was released 10.6. and can be found at: https://vm.tiktok.com/ZMddw52bT/